Hi everyone! I was recently contact by my friends at Flabslab to customize a Daruma Club vinyl toy for the Action City booth at this years STGCC. I went with a staple structure on this design and contrasted a black and white color pallette on the face with a bright and colorful, pattern filled body. The partner to this custom has the reverse color structure and a single eye, a throwback to some of my older customs. The angry Daruma figure is available now in my webstore and the scared/confused custom can be found on display at STGCC this September 9-10. 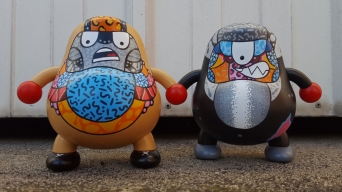 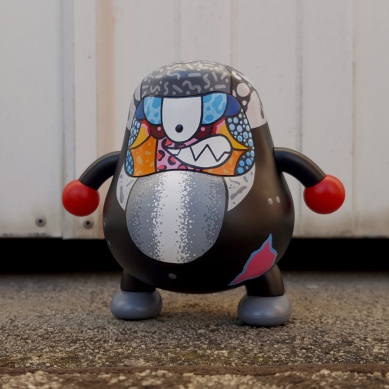 Here is a little bit more info on the figure itself.

“The traditional ‘Daruma’ doll is named after Bodhidharma, legendary Buddhist monk and founder of Zen, which implies positive energy, such as love, happiness and persistence, etc. It is one of the most popular talismans of good luck in modern Japan, and are also viewed as a symbol of perseverance and hope.

Nowadays, Daruma is designed into various sizes, with different materials to spread this kind of energy. A new series of collectable art toys – DARUMA CLUB from TAMASHII NATIONS, the sub-brand of BANDAI emerges at this moment to spread this positive energy in a fun way.

Based on traditional daruma dolls, the highlight of DARUMA CLUB is the additional arms and legs which allows the figure to stand up and makes it more humanized. In order to spread this traditional culture widely and arouse the interests of a younger generation, DARUMA CLUB has brought in popular characters such as Peko Chan, Ultraman, Creamy Mami and Stay Puft Marshmallow Man etc. “